You can’t teach an old dog new tricks, but you can wrap it in an API compatibility layer. In this post, you’ll learn how to use older versions of Heroku Buildpacks with the Pack CLI by wrapping them in a Cloud Native Buildpack shim that’s as easy as:

Cloud Native Buildpacks (CNB) are a new way of building Docker images without a Dockerfile, but they’re based on a much older technology: Heroku Buildpacks. Buildpacks were first created almost 10 years ago as a way of adding multiple-language support for the Heroku platform. Over time, other platforms adopted the technology, but the lack of governance for the Buildpack API led to a fracturing of the ecosystem. In 2018, the ecosystem rejoined with a new unified API under the CNCF. 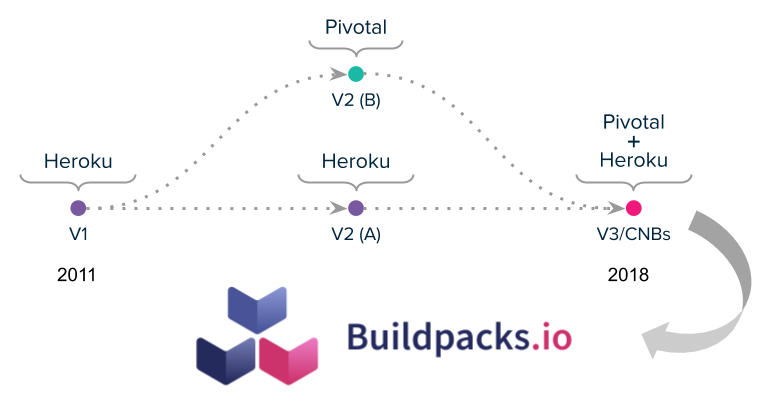 The new CNB API version (v3) broke compatibility with existing Heroku buildpacks (v2(a)). In order to preserve the functionality contained in the thousands of existing v2(a) buildpacks, we built a v2(a) to v3 compatibility layer or “CNB shim”.

Then you can run that image with a command like:

You can also use this URL in your builder.toml or project.toml.

The downside to using the shim is that v2(a) buildpacks can’t create more than one layer. Your entire app and its dependencies will be baked into one large layer in the Docker image (a bit like a Heroku slug). However, the base image still has its own layers.

The upside, in addition to easily turning your source code into a Docker image, is that you can update your base image with the pack rebase command. Rebasing is one of the biggest advantages of buildpacks over other Docker build mechanisms because it allows you to apply certain kinds of security patches without rebuilding the image.

The official heroku/buildpacks:18 builder image uses the CNB shim for several of the officially supported buildpacks (as you can see from its builder.toml). But it also includes some first-class CNBs (like the Node.js, Java, and Ruby CNBs).

Whatever buildpacks you choose to run, you’ll gain the composibility, modularily, speed, and security of the buildpack ecosystem.